It’s been far too long since my last post, and that one was barely a post at all. So here is something. My smaller camera broke a week ago, my D70s is not an every-day-carry camera, and I still haven’t been officially paid yet, so it’s looking like it will be all cellphone pics from here on out. I’m sorry.

Due to a bit of a debacle on my father’s part, I will be back in America earlier than I had planned, in late June. Just an FYI, you can’t change the return trip date of a round trip flight after you have already gone one way.

I had to deal with my bank yesterday in town. I found a branch of the Banco di San Giorgio closer to campus than the one I’ve dealt with before. I went there just to be told that my account is not with them, and I need to go to the other branch to deal with it. Okay. That makes perfect sense, right?

I took care of my business there, and went looking for a hair place. Before I found it, I found a dealer of airsoft guns and equipment. For those who don’t know, basically these are fake guns that shoot plastic pellets that kids and others use in games. They can look pretty real. Anyway, I normally wouldn’t patronize such an establishment, but I wanted a new hat. On my eternal quest to look like an a-hole and protect my head from too much sun or rain, I’ve been wearing a boonie hat now and then. I was kind of bitching at myself about how ridiculous my snow camo one looks and how I should find a solid-colored one if I’m going to wear it as often as I do. Cue airsoft joint. 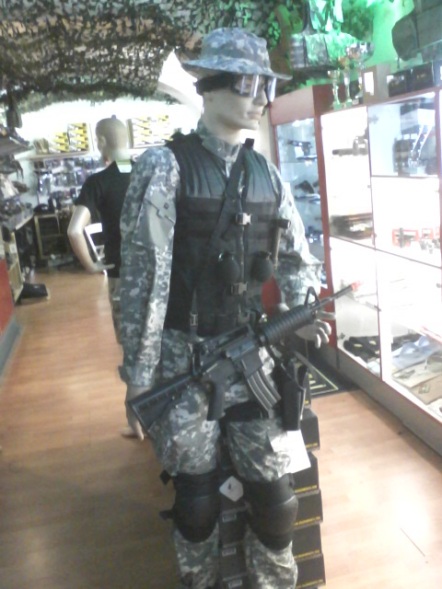 Yes, that kind of hat.

Before I went to the hats, I screwed around with some of the airsoft guns. I dropped a mag on the floor, and picking it up, noticed a €250.00 price tag, on the mag. I sincerely hope that was for the whole rifle. There were plenty of boonie hats to be had, though as far as I could tell, only one of them fit my apparently-gigantic head. It isn’t a solid color, but it looks a lot less ridiculous than my older one.

I found the hair place and got my hair shampooed and cut for less than half what a cut would cost me at the mall and was done with a half hour left before a movie I wanted to see in the theater.