I’m back in America. Flew back on June 20. Genova to Munich to Philadelphia to Charlotte to Charleston. Window seats all the way, so I got to watch the wing trailing edge flaps doing their thing during takeoff and landing. All that extra work tacking the Aerospace onto my Mechanical was definitely worth it.

I did actually end up getting paid, on June 6. Got the money wired to my American bank two days before I left, when a Euro was worth just north of $1.25. This was the day after the supposedly-pivotal Greek elections, in which the kinda-pro-bailout/austerity parties barely beat the newcomer screw-austerity-we-can-renegotiate-this-thing party. You can bet I watched that closely. Some were predicting Euro/USD parity at the time. Others were shocked at such speculations. Now the Euro has lost 2.95% of its value against the dollar in the last week. Germany, evidently Europe’s last hope for competitiveness on the world stage, is faltering economically. Who’s going to bail everybody out, now?

That said, I’m happy with my money here in America, where it belongs.

I got to see the code I worked on forever actually get put to use in the lab the week before I left. It seemed to do what I wanted, though it still needs some work.

I jumped right back into this whole America thing with home-made hamburgers the night after I got back. Delicious! The next day was Papa John’s Pizza, which was kind of depressing. It was basically tasteless, compared to anything I had in Italy. Luckily, in Morgantown, I live a block away from an honest-to-God Italian-immigrant-runs-the-kitchen pizza place, Pizza Al’s. My faith in pizza may yet be restored.

Speaking of food, I lost more than thirty pounds in Italy. I think I’m going to have to start exercising. I like looking good, but I also like hamburgers. Life just isn’t fair.

But anyway, I’m glad to be back in America.

We, as Americans, are the descendants of people who decided that Europe sucked so bad that it made sense to get on a boat for months and strike out anew in a completely foreign land, where, at the time, if you couldn’t feed yourself, you would probably starve to death. We are the descendants of people who fought, and won, a war of independence against the world’s preeminent superpower, because we didn’t like the way they were running things.

Citizens of few, if any, other nations can say the same.

Kind of on that topic, I never really told the guys I worked with about this blog, or at least not it’s address. I don’t really know why. I did tell some guys at NETL about it, and so, the main Italian I worked for (and still am working for) found out about it. He immediately freaked out upon learning, from the About page, of the namesake of my blog, a piece of the fire control group in the SA vz. 58. He left a very earnest message on my adviser’s voice-mail, asking if I was a revolutionary, or otherwise unhinged. Luckily, I had mentioned my affinity for firearms to said adviser, who also has such an affinity, and so he was able to defuse the situation. I just learned of this from him today.

As Americans, we take for granted freedoms much of the rest of the world can only dream of.

I celebrate one of those freedoms with Italian engineering, interestingly enough. It shall serve as both a little reminder of Italy, and why America is so awesome. 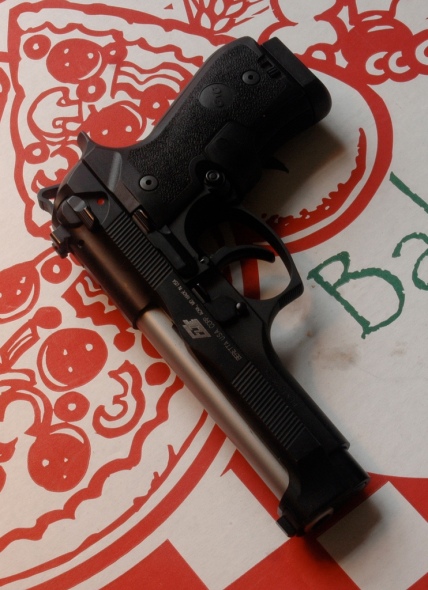