Pizza Al’s can’t do a pizza with an egg on it. I can’t bring them an egg or anything. It’s against the law. Bah.

Al will still be getting plenty of my money, nonetheless. The same food at the same chain restaurants, everywhere you go, gets old. Like I said earlier, Italy got the food right.

I’ll update this blog if anything relevant comes up, or if the research I did in Italy gets published, but otherwise, I’m done. I might start another blog somewhere down the line, but this one is linked to on the WVU Honors Blog as a Study Abroad Blog, so it really ought to just sit around as an archive. Hopefully, I’ll never end up living under a bridge, unable to pay the $26/year.

To sum up, if you get the opportunity to study abroad, do it. Chances are, at no other point in your life will you be able to spend the better part of a year in a foreign country.

I just realized today that I have already passed the halfway point in my stay here. It was a bit surprising. I had totally quit thinking about it. Italy is now basically my normal. The thought of leaving is a bit saddening. I guess that is normal, too.

This guy is Italian.

Here’s a playlist of some of his work in Youtube.

The view out my dorm window today.

Update: And long stretches of cold weather are not planned around. A few days after the picture was taken, I ran across an exposed plastic pipe outside a building near where I work that had burst in two places. It sprayed a mist of water all over the road, which of course froze. This went on for several days. It was a little entertaining, honestly. 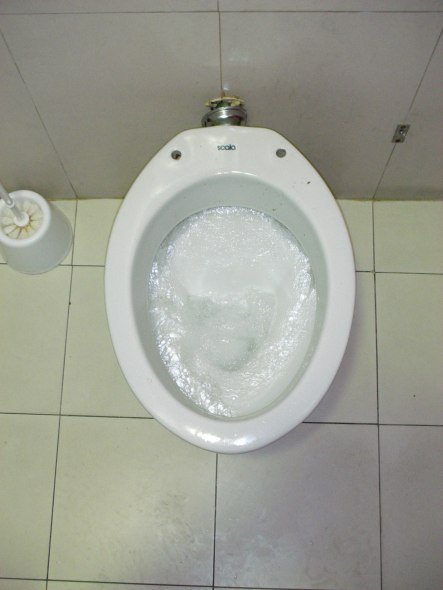 This is far too common here.

I can sit, and I can crouch, but I have a hard time hovering.

Why don’t mechanical pencils come with caps? Almost every time I start to use one, I have to extend the lead, because the excellent marking surface I had just hours before has broken off in my jacket pocket, leaving a sharp awkward edge that I need to write with before I get my proper rounded tip back. And, I occasionally stab myself through the jacket lining. I should start a writing implement company, or search online for what I want, or something.

I listened to the entire Orange Bowl on the internet stream of Morgantown’s WVAQ, from 2:30 am Italy time Thursday morning, through to basically the end of the post-game show around 7:00 am. It was awesome to listen to, as Tony Caridi does an excellent job with the play-by-play, but it is still hard to really get a feel for just how fast the action happens. I found this late Friday:

I’d like to give an internet high five to all the Mountaineer fans who read this. That was an excellent victory.

Jack in a can.

Oh God. At first I wanted to complain about the generations of tradition thrown to the wayside by putting Jack Daniels in cans. Then I noticed, while looking at my own picture, the “A Perfect Mix of Whiskey and Cola.” I don’t know whether that is better or worse. Considering that everything on the can is in English, I’ll bet this is primarily made for Americans. Why are we so horrible?

Is it me or is it the culture?

An armed security guy just checked up on me in my little research shack, making sure that I actually work here. For the second time in a couple of weeks.

These are some funny guys.

Highlight from the article:

Jubilant Tory MPs hailed his decision as a massive step towards Britain’s EXIT from the European Union.

That was not my emphasis on the ‘exit.’ That was straight out of the article.

I get the feeling I’m going to be making a lot of posts like this.

Stuff you can read on any choice of news sites. Quoted here, so making posts doesn’t require actual content on my part. I’ll just throw out the excuse that this corroborates my latest megapost. Oh and trying to keep a respectable post rate while nothing interesting happens to me in particular.

What? You thought I was making a reference to the ongoing political volatility within my source of income, the European Union? No, no, no. My own laziness and boringness.

In that regard, I’ve made it a habit to close the window in the laundry room every time I’m in the hallway, just to spite the little Italian gremlins who open it constantly. I was seriously in the laundry room, out of it, and back in it again in less than five minutes yesterday, and in that time, someone I didn’t see opened the window that I had just closed. Definitely gremlins.

And there are honest-to-God roosters somewhere outside of my office, crowing every night to remind me when I’m up too late.

Remember, I’m not just boring. I’m boring in another country. With roosters.

These little Fiats are everywhere, but I haven't seen one quite like this.

There are no doughnuts here.

But Italian croissants can do a lot of the same things. 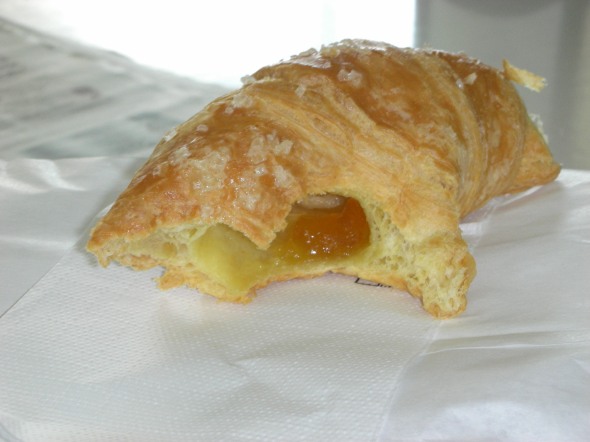 A Mix of Strawberry Filling and Apple Filling

I actually found something doughnut-shaped in a sweet-shop a couple weeks ago. I was displeased to find it was but a thin bread shell surrounding over-sweet cream. I’m happy with croissants.

This is every week, so far.

There might be scattered showers once every week and a half or so, and overcast skies are about as rare. This just about kills beautiful weather for me. Give me some rain. Though that may just mean that I miss what I’m used to.

Actual Italian alert: It generally rains this time of year here. God is obviously trying to mess with my mood.