Here’s another one, no kidding, one block away:
END_OF_DOCUMENT_TOKEN_TO_BE_REPLACED

Dancing in the Street

This weekend, in the same older section of town where the street fair was, there was a fashion show, or dance-off, or something.

I may never know, but there was definitely a red carpet.

Also, in the top-left, the outside of one of Savona’s more archetypical big-ass churches. So that’s done, at least until the next time I am out that way and think about it. This church is basically in an alley. In fact, that’s the case with a few big-ass churches in town. My best guess is that there was plenty of space from which to gaze upon its magnificence when they built it four-hundred years ago, but somewhere along the line, other people decided adjacent land was just too valuable.

Also there, at least briefly, was this piece of history: 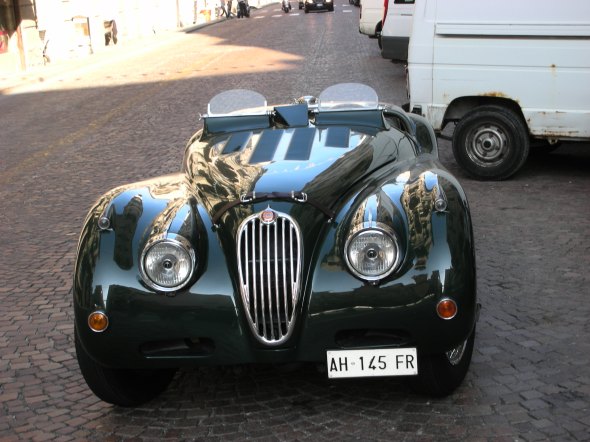 And while on the topic of autos, proof Ford hates America:

END_OF_DOCUMENT_TOKEN_TO_BE_REPLACED

Last Friday, I applied for my residence permit, which one would imagine the visa process would have sufficed for, but whatever. Basically, a guy copied information out of my passport and visa and took down the names of my mother and father. Then, he got my fingerprints with some electronic fingerprint scanner. Then I went upstairs, where another man got scans of my fingerprints, again, along with scans of my palms. And that was it. Without a fellow researcher who had volunteered to essentially be a translator, I would have been royally screwed, though, as the waiting process was actually complicated.

This comes after giving a detailed form to people in a more central office, in Genoa, where I was issued an appointment here in Savona. According to my researcher/translator, coming to America for a long period, this is all done right off the plane.

This may be complicated and annoying for another reason than pure bureaucratic zest. A lot of these hoops were supposedly made with the purpose of making it harder for illegal immigrants to stay here. As with America, these immigrants come from the south. In the waiting area, there was a large minority of Africans.

With as much strife as there is in Africa, I don’t particularly blame them. At the same time, there are a whole lot more people out there living in hellholes than the entire population of the somewhat-free world (scratch-paper calculations there). So too bad.

I’m still in the hostel, even though classes started last Wednesday, because University housing is apparently completely unplanned. Freshmen show up and start living in the dorms, and then they see how much room they have left for everybody else. Which is funny because the guy who invited me here did a lot of work to get me housing for cheap.

Edited to Add: I just talked to an actual Italian in the same program as me in the University, who is also living in the seminary. He was told he could move in on October 15th. (I think he said ‘fifteenth,’ may have been ‘fifth,’ but that is probably wishful thinking on my part.) This hosteling thing is going to cost me through the nose. Jesus.

Which will hopefully work out at some point, considering I won’t see a pay check for a while. I need to have an Italian bank account to do that. I need a residence permit to get an Italian bank account. I may not have a residence permit for up to two months. I need one for money-man to even start the paperwork. Bitter? No. I’ll just keep paying for everything with cash I pull out of the odd ATM that can take American cards.

Not very fun to read? Have another church.

END_OF_DOCUMENT_TOKEN_TO_BE_REPLACED

Sunday, I biked downtown a bit to get at some food and found this nice surprise.

Mix a farmer’s market and a bunch of people selling new clothes and shoes and things, and put it in the middle of what would have been a moderately-busy street if it weren’t blocked-off, and you get what I found. It’s a great idea, at least on a Sunday. I don’t know if there is actually a dedicated farmer’s market in town, but I’m going to bet on a big no, considering the number of booths at this thing. I found some good grapes and sweets for myself.

As for the rest of last week…

END_OF_DOCUMENT_TOKEN_TO_BE_REPLACED

About me. About the blog.

I am Zachary Santer. I am a student at West Virginia University. Right now, I’m in Savona, Italy. I was invited here to perform research for an Italian professor who I worked for at the Morgantown National Energy Technology Laboratory during the summer of 2010 while he spent a year-long sabbatical there. This is a part of a knowledge-sharing agreement between the Morgantown NETL site and the research group here. While here, I will be taking some classes, doing a bunch of research, and seeing the sights of northern Italy.

I hope I can make this blog interesting and enjoyable. Let’s find out.

Also, this is a copy of the general About page. It seemed like a good way to start things off.